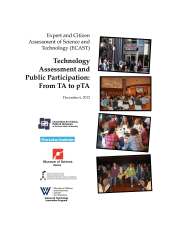 From 1972 to 1995 the United States became a world leader in applying insights about technological change to public policy by creating and operating the Congressional Office of Technology Assessment (OTA). The support base for OTA was always narrow, however, and the office ultimately fell victim to a political clash between Congress and the President in 1995, resulting in the cancellation of its funding.

In contrast to this narrative of rise and decline, more than a dozen European nations plus the European Parliament, inspired (ironically) in part by the U.S., established their own technology assessment agencies from the mid-1980s onward.  Most remain in operation today as vital contributors to science and technology policy discourses and developments in their respective countries. In addition to strong analytical capacities, these agencies have pioneered promising methods for citizen participation, giving rise to a new practice known as participatory technology assessment (pTA).

In the U.S., recognition of pTA’s value has grown in recent years.  In light of the limited prospects for major initiatives to develop it, however, a number of organizations formed the Expert and Citizen Assessment of Science and Technology (ECAST) network in 2010 as the appropriate means to advance pTA in the U.S.  ECAST’s founding organizations are the Consortium for Science, Policy and Outcomes at Arizona State University; the Loka Institute; the Museum of Science, Boston; Science Cheerleader; and the Science and Technology Innovation Program at the Woodrow Wilson International Center for Scholars.

This report about participatory technology assessment (pTA) is prepared by ECAST members.  Our primary motivation is to articulate the role that a network like ECAST might play in conducting and institutionalizing pTA in the U.S.

ECAST’s first large scale project was coordination of the U.S. component of World Wide Views on Biodiversity.  This global citizen consultation, conducted in 25 countries on September 15, 2012, provided input to the Eleventh Council of Parties of the UN Convention on Biological Diversity (CBD) that took place the following month. In this report, we examine the process and results of WWViews as a means of understanding the challenges and opportunities for expanding the practice of pTA in the U.S.  Our report thus takes up three main themes: